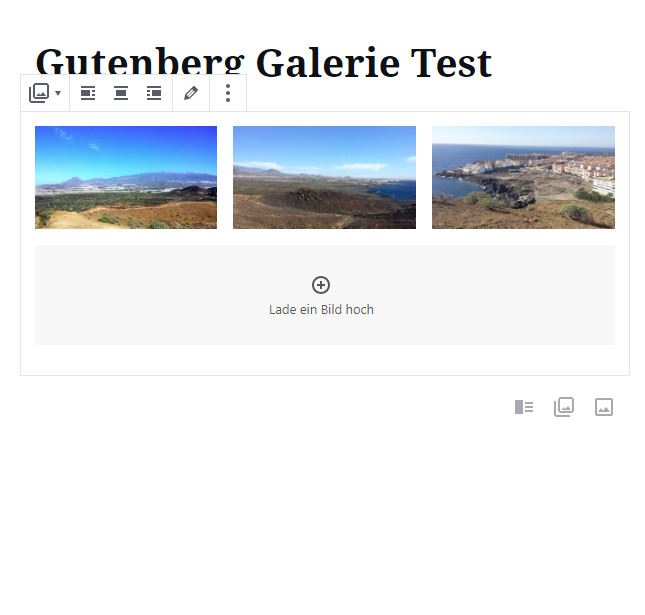 Now, for the first time, I have had to create an article with pictures using the new Gutenberg editor, which WordPress delivers as the standard editor since version 5.0.

First of all: In my eyes, the Gutenberg editor has been a great success in terms of handling. Anyone who has already worked with other modern content management systems (TYPO3, FirstSpirit, …) already knows the principle of “blocks”, as the individual elements in WordPress are called, and will find their way around immediately.

I also think it’s cool that you can even change the block type for some block types. However, I still find other blocks a bit difficult to get used to. But with time… 😉

But what I think needs to be greatly improved before I think I’ll really work with it is the way it handles images.

Poor handling of images for the frontend

Again, little to criticize from the backend. And yet

1. No standardisation of image sizes

Images can be resized in the backend. What initially goes down very well, turns out to be very problematic at the latest when you want to use several images that should have the same dimensions: There is no possibility to assign a standard dimension (e.g. 150px width) to an image. The resizing is only done on “slider basis”, which makes it very fiddly to impossible to resize all images to the same size.

2. All pictures are always delivered in original size

Even if you have reduced the size of the images to “Thumbnail”, the image will still be delivered in its original size. This leads to the fact that the pages containing many thumbnails become unnecessarily large (as far as the data volume to be downloaded is concerned). The Gutenberg team has also been aware of the image-size problem for at least 9 months.

On the one hand, this puts a strain – especially relevant for smartphone users – on the download data volume, and the download time of the page (relevant for all users with low bandwidth) and thus the entire user experience.

And on the other hand – especially for the reasons mentioned above – this is also very harmful for SEO. The search engines (especially Google) now consider the mobile-friendliness of a website as a significant ranking factor. So far WordPress – especially in connection with an SEO plugin like YOAST – was considered to be quite SEO-friendly. With the current solution, this image is likely to suffer a lot.

3. No influence possible on the appearance of galleries

At first I thought “Oh, cool, so easy to include a gallery”, but when I then saw in the preview that the gallery with 3 images that were still displayed side by side in the backend (just as I had wished), was then suddenly displayed in the frontend as 2 images side by side and the 3rd image in full width below it, I was a little disappointed because of the obvious difference between the backend display and the frontend display.

But when I found out that I can’t influence the look of the gallery in any way… I was more than disappointed and had to switch back to the conventional editor with the Classic Editor plugin.

Here are 3 pictures of the experiment (Many thanks to mundi-roth.de for the pictures and screenshots): 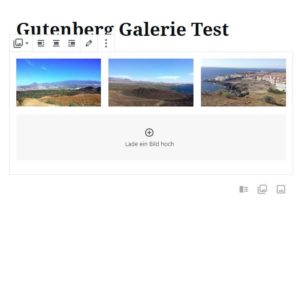 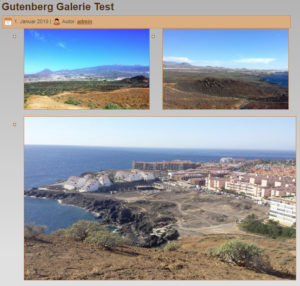 I also discovered another point: The generation of permalinks now ignores the German “umlaut rules” again, i.e. the replacement of the German umlauts ä, ö and ü now takes place again (if you can remember: this was a problem for a long time) by a, o and u – instead of the expected replacement by ae, oe and ue.

This is definitely also a drawback. – Of course you can correct this manually, but it is annoying and error-prone.

In my opinion, marking an (external) link as nofollow is also one of the must-haves of any CMS editor – currently (as in the Classic Editor) this is only possible by directly editing the HTML code manually – otherwise, no (affiliate) links or other commercial links can be set Google-compliant. Here I had hoped for more comfort.

The Gutenberg editor is certainly a step in the right direction – but unfortunately, in my opinion, it was more than premature to deliver it in its current state as the only standard editor.

What do you think of the Gutenberg editor – do you already use it unconditionally? If so, how do you deal with the picture issues? Or do you ignore them? Or what other shortcomings prevent you from using the Gutenberg Editor?

Translated with the support of www.DeepL.com/Translator